NSX-T address all the K8s networking functions, load balancing , IPAM , Routing and Firewalling needs, it supports complete automation and dynamic provisioning of network objects required for K8s and it’s workload and this is what i am going to uncover in this blog post.

Other features  like it has support for different topology choice for POD and NODE networks (NAT or NO-NAT) , it supports network security policies for Kubernetes , Clusters , Namespaces and individual services and it also supports network traceability/visibility using NSX-T in built operational tools for kubernetes.

I will be covering the deployment procedure of PKS after some time but just want to let explain that what happens on NSX-T side when you run “#pks create cluster” on PKS command line..and then when you create K8s Namespaces and PODs

So when you run #pks create cluster with some argument , it goes to vCenter and deploys Kubernetes Master and Worker VMs based on specification you have chosen during deployment and on NSX-T side a new logical switch get created for these vms and get connected to these vms. (in this Example one K8s Master and 2 Nodes has been deployed) , along with logical switch , a Tier-1 cluster router get created which get connected to your organisation’s Tier-0 router.

for each default namespace, PKS automatically deploys and configures NSX-T Logical Switchs and each logical switch will have its own Tier-1 router connected to Tier-0.

Typically, this runs pod like heapster , kube-dns , kubernetes-dashboard,  monitoring db , telemetry agent and stuff like ingresses and so on if you deploy so.

on NSX-T side as explained earlier a Logical switch get created for this Namespace and for each system POD a logical port get created by PKS on NSX-T.

This is the cluster’s default namespace which is used for holding the default set of pods, services, and deployments used by the cluster. so when you deploy a POD without creating/specifying a new name space , “default Namespace” becomes default container to hold these pods and as explained earlier this also has its own NSX-T logical switch with a uplink port to Tier-1 router.

now when you deploy a Kubernetes pod without a new namespace , since that POD will be part of “Default Namespace”, PKS create a NSX-T logical port on the default logical switch.   let’s create a simple POD:

as you can see a new logical port has been created on default logical switch.

i have created a new Namespace called “demo”.

if you observe below images left image showing default switches and right image is showing logical switches after creation of new Namespace.

and as you can see a new Logical switch has been created for new Namespace.

in this example we deployed POD and get the internal network connectivity but internal only connectivity is not going to give access to this web server to outer world and this is default forbidden in kubernetes , so we need to expose this deployment using load balancer to the public interface on the specific port. let’s do that:

Lets browse this App using EXTERNAL-IP as you might know CLUSTER-IP is internal ip.

As above when we expose this deployment using service on NSX-T there is a cluster load balancer get deployed automatically when we create cluster , on this load balancer NSX-CNI go ahead and add pod to virtual servers under a new load balancer VIP.

if we drill down to pool members of this VIP , we will see our kubernetes pod ep ips.

behind the scene when you deploy a cluster a LB logical switch and LB Tier-1 router which is having logical connectivity to the Load Balancer and Tier-0 Router , so that you can access the deployment externally.

This is what your Tier-0 will look like, having connectivity to all the Tier-1 and Tier-1 is having connected to Namespace logical switches.

these all logical switchs, Tier-1 router , Tier-0 router creations , their connectivity , LB creations etc all has been done automatically by NSX-T container (CNI) plugin and PKS. i was really thrilled when i tried this first time and it was so simple , if you understood the concept.

The NSX-T container plugin helps to exposure of container “Pods”as NSX-T logical switch /ports and because of this we can easily implement micro-segmentation rules. once “Pods ” expose to the NSX ecosystem, we can use the same approach we have with Virtual Machines for implementing micro segmentation and other security measures. 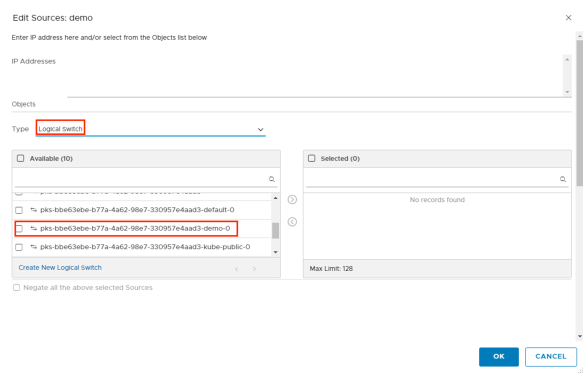 or you can use security groups based on tags to achieve micro segmentation.

This is what i have tried in this post to explain what happen behind the scene on NSX-T networking stack when you deploy and expose your applications on kubernetes and how we can bring in proven NSX-T based micro-segmentation.

Enjoy learning PKS,NSX-T and Kubernetes one of the best combination for Day-1 and Day-2 operation of kubernetes 🙂 and feel free to comment and suggestions.