In an NSX for vSphere environment, basically the management plane is responsible for providing the GUI interface and the REST API entry point to manage the NSX environment.

The control plane includes a three node cluster running the control plane protocols required to capture the system configuration and push it down to the data plane and data plane consists of VIB modules installed in the hypervisor during host preparation.

Controllers maintain the routing information by distributing the routing data learned from the control VM to each routing kernel module in the ESXi hosts. The use of the controller cluster eliminates the need for multicast support from the physical network infrastructure. Customers no longer have to provision multicast group IP addresses.  They also no longer need to enable PIM routing or IGMP snooping features on physical switches or routers. Logical switches need to be configured in unicast mode to avail of this feature.

NSX Controllers support an ARP suppression mechanism that reduces the need to flood ARP broadcast requests across the L2 network domain where virtual machines are connected. This is achieved by converting the ARP broadcasts into Controller lookups. If the controller lookup fails, then normal flooding will be used.

The ESXi host, with NSX Virtual Switch, intercepts the following types of traffic:

The leader for each role is responsible for allocating tasks to all individual nodes in the cluster. This is called slicing and slicing is being used to increase the scalability characteristics of the NSX architecture , slicing ensure that all the controller nodes can be active at any given time 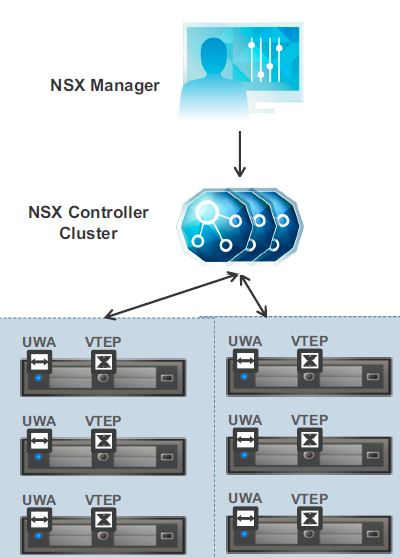 NSX Manager chooses a single controller node to start a REST API call. Once the connection is established, the NSX Manager transmits the host certificate thumbprint, VNI and logical interface information to the NSX Controller Cluster.

All the date transmitted by NSX Manager can be found in the file config-by-vsm.xml in the directory /etc/vmware/netcpa on the ESXi host. File /var/log/netcpa.log, can be helpful in troubleshooting the communication path between the NSX Manager, vsfwd and netcpa.

Netcpa randomly chooses a controller to establish the initial connection that is called core session and thsi core session is used to transmit the Controller Sharding table to the hosts, so they are aware of who is responsible for a particular VNI or routing instance. 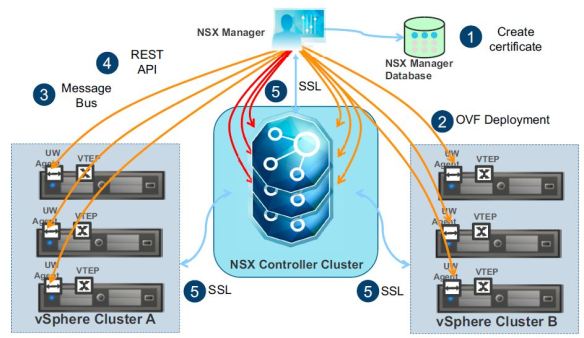 Hope this helps you in understanding NSX Controllers.Happy Learning 🙂