A vCenter HA cluster consists of three vCenter Server Appliance instances. The first instance, initially used as the Active node and is cloned twice to a Passive node and to a Witness node. Together, the three nodes provide an active-passive fail over solution.

Deploying each of the nodes on a different ESXi instance protects against hardware failure. Adding the three ESXi hosts to a DRS cluster can further protect your environment.When vCenter HA configuration is complete, only the Active node has an active management interface (public IP). The three nodes communicate over a private network called vCenter HA network that is set up as part of configuration. The Active node and the Passive node are continuously replicating data. 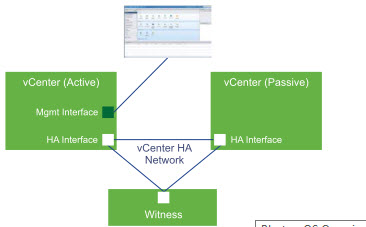 All three nodes are necessary for the functioning of this feature. Compare the node responsibilities.

I hope this will help you to plan your next vSphere upgrade with vCenter High Availability.